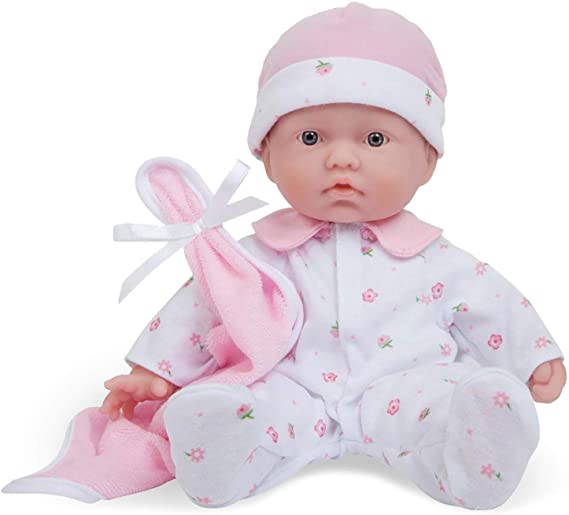 When choosing a doll for your little one to play with, realism should play a key role in your selection. After all, how will they develop a sense of care and attachment to their precious new toy if it feels like it doesn’t realistically represent a baby?

JC Toys has been addressing this issue for 30 years now. They’re a toy company renowned for the realistic portrayal of infants and have been in the business of doing so for 30 years and more. The]La Baby is part of their newest and one of the most exciting lines to date. Judging by the overwhelmingly positive responses it’s been getting from parents and children alike, it will put a smile on the faces of both for a good while yet!

JC Toys really outdid themselves with the minute attention to detail regarding the doll’s realism. The cuddly little feet and adorable fingers just beckon to be squeezed and played with, but nothing compares to the amount of detail put into portraying each baby’s head.

The chubby cheeks and small pouting lips are very life like. The hair on the back of the doll’s head steals the show though as it is fluffy and soft and has the feel of a real baby’s hair as anyone who’s held a newborn in their arms can attest to. Truly excellent attention to detail is shown here.

As far as the dolls’ general characteristics are concerned, each is 11 inches tall. This makes it big enough for even small children who’ve taken in interest in the world around them to carry around and nurture.

The recommended minimum age for these dolls is given as 18 months, but even somewhat younger children ought to have a great time when playing with one. As it is so small, the La Baby is also a portable toy, able to occupy a negligible amount of space in your child’s bag and still keep it company if you’re going on a trip somewhere.

The head, hands and feet are made from a durable vinyl, while the baby’s body is composed entirely out of a soft fabric. Combine the doll’s small size and lack of hard or angular features and you’ve got the ideal playmate your child will love to cuddle with during the day and cuddle up with when it’s bedtime.

Another feature you won’t encounter with most dolls is the fact that this one is scented. The scent isn’t quite the “new baby smell” people rave on about, but it is clean and barely perceptible. It’s one of those small extra touches which don’t mean much on their own but give the product as a whole the added worth one can truly appreciate.

It’s inevitable that the doll will get dirty sooner or later, at which point you can either wash it by hand or place it in a washing machine and wash it that way using a gentle setting. Regardless of the way you’re going to wash it, the doll’s great construction and quality colors used in painting it will keep it in shape and looking as bright and happy as the day you first bought it.

Variety and diversity have been covered very well too – you not only have a choice of the baby’s outfit color, but you get to pick its ethnicity too.

African American, Asian, Hispanic, and Caucasian are all represented with blue, purple, and pink outfit variants being available for the Caucasian dolls. Once again realism is a defining factor of the La Baby – the skin color isn’t the only thing which sets them apart, with other, subtler racial features being visible too.

In that respect, it’s the perfect kind of gift not just for children of all backgrounds to enjoy, but also to foster a love of diversity at a very early age with. It also makes the baby great for mixed groups of children like pre-schoolers and kindergartners as a tool that lets them explore their differences in a playful way and discover that care and empathy can easily transcend all colors.

Each baby has only one little outfit and a blanket. The cute onesie can be taken off and washed separately, while the blanket can be made to cover the baby up or placed inside its little hand.

Even though these dolls sport a fun design with lots of delicate flowers on pastel backgrounds of pale violet, blue, rose, or pink, it would have been better if each baby came with at least one extra set of clothes. Another baffling thing about this is that JC Toys doesn’t let you choose the color of the baby’s outfit, so you’re always stuck with the same purple one for the African American doll, a pink one for the Asian one etc.

One last thing one could argue about is the doll’s price. Its realism aside, the quality of the make and especially its small form factor may make it seem that the La Baby should occupy a price bracket that’s slightly below the two-digit price you’ll have to pay for it online. It’s up to you to figure out whether or not this is a deal breaker and get a good sense of scale before committing to the purchase.

If you’re looking for a meticulously real representation of an infant for your son or daughter to play with, and aren’t concerned with the size and lack of clothing options that come as part of purchasing it,makes for a wonderful gift.

Children who’ve barely begun comprehending the world around them take to it as readily as kindergarten-aged children who’ve discovered the joys of playing house. As it’s one of those toys that’s only limited by one’s imagination, they’re sure to have a wonderful time playing with one.