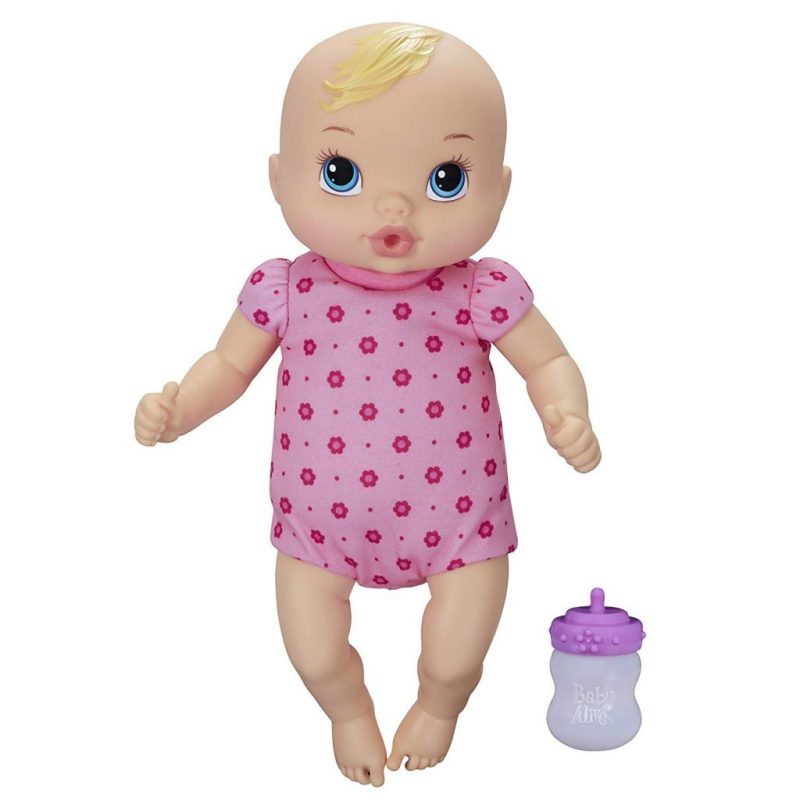 Do you want your children to get a playful taste of what it means to be a parent at a very early age? Do you need a smash hit gift for a child who loves to play with dolls, but don’t have the budget for an extravagant gift set? In that case, Hasbro has an inexpensive and fantastic answer for you, and has had one since the 70s in the form of the Baby Alive line of dolls.

Mind you that the new versions of these dolls are a marked step up from those you or your parents might have had when growing up – they’re softer, more durable and are even made with materials that don’t contain harmful chemicals anymore. The more things change, the more they stay the same though, as you’ll discover if you let your child play with the Luv’ n Snuggle doll.

Let’s get one thing straight out into the open – this isn’t a premium doll, nor was it ever meant to be one. Everything written and judged about it should be viewed in that light, and we believe that you’ll find it a favourable one if you take that into account.

This is one of the smaller dolls on offer at about 12 inches tall. As sizes go, this one is ideal for a child in the 18-month to 2-year range as it is just big enough for them to hold onto it tightly and correctly while being so light that the child can carry it all over the house the entire day without getting tired.

The doll’s proportions follow that of an infant more or less to the letter, so the feeling of interacting with and taking care of what looks like a real baby won’t be lost on your child.

Why Choosing This Doll

There are some departures from a look one would consider true to life – the doll’s eyes are painted a cartoonish blue and it’s highly doubtful that you’d see a tuft of bright blond hair quite like the one that crowns her soft round head, but that will probably not matter to the kids nearly as much as the baby’s overall happy and inviting appearance that beckons them to take her in their arms and squeeze tight with affection.

There are brunette and African American versions of the baby available too – the design is identical, but the skin, hair and eye-color are different, giving you a reasonable number of choices.

A nice little bottle is the doll’s only accessory. You can open it up, fill it with water/milk etc. and give it to the baby to pretend drink. The bottle slides into the doll’s mouth easily enough. The doll’s thumbs can be “sucked on” too, and since its body is flexible, so can the big toes. The softness of its body makes the doll a huggable companion kids love to tote around with.

Is yours one of those children who insists on taking their favorite toy EVERYWHERE they go? This is probably the ideal doll for it then. As size is not an issue, taking the doll along with you for a visit to relatives or sending it along with your child on a sleepover shouldn’t be much of a problem for anyone involved.

The cute pink clothes it comes with sport a pattern of delicate flowers and have been stitched onto the Baby Alive doll. While you can’t remove them, it will save you the hassle of having to put them back on again whenever you decide to wash them.

Speaking of which, a big point in the doll’s favor is that it can be machine-washed and dried later on, both times on the gentlest settings.

While we can appreciate simplicity, especially when it means that quality isn’t taking a backseat to dubious features, there’s really not that much about this doll to hold a child’s attention for a long while.

As it can’t be changed and doesn’t interact with the child in any way, it’s much more likely that it will be discarded earlier as an inanimate object as there’s nothing other than the child’s own imagination to keep the magic going, unlike some other baby alive models famous for their eating, drinking and other, less savory capabilities.

Should you give the Luv ‘n Snuggle Baby Doll a chance then? Absolutely! There are a number of reasons for this actually; the doll is well-made, exceedingly affordable, and just the right size for its primary audience – the 1- and 2-year olds who are beginning to discover the joys of meaningful play with dolls and most of whom probably won’t be too perturbed by the fact that this particular doll can’t be made to pee in her diaper.

It’s a great little doll for when you have to buy an inexpensive yet effective gift without making a dent in your budget, when the fact that you’re gifting someone their very first doll is much more important than the accompanying knick-knacks which may not even be as important to the child as the new baby itself, and when you want to give the gift of Christmas to as many children as you can without breaking the bank and still know that you made the right choice as far as quality is concerned. Basic as it may be, this is a toy from Hasbro after all, with everything this implies.